Costs associated with private jet use may not be material to companies — but insurgent investors have succeeded in campaigns drawing attention to their use, for both business and personal activities. 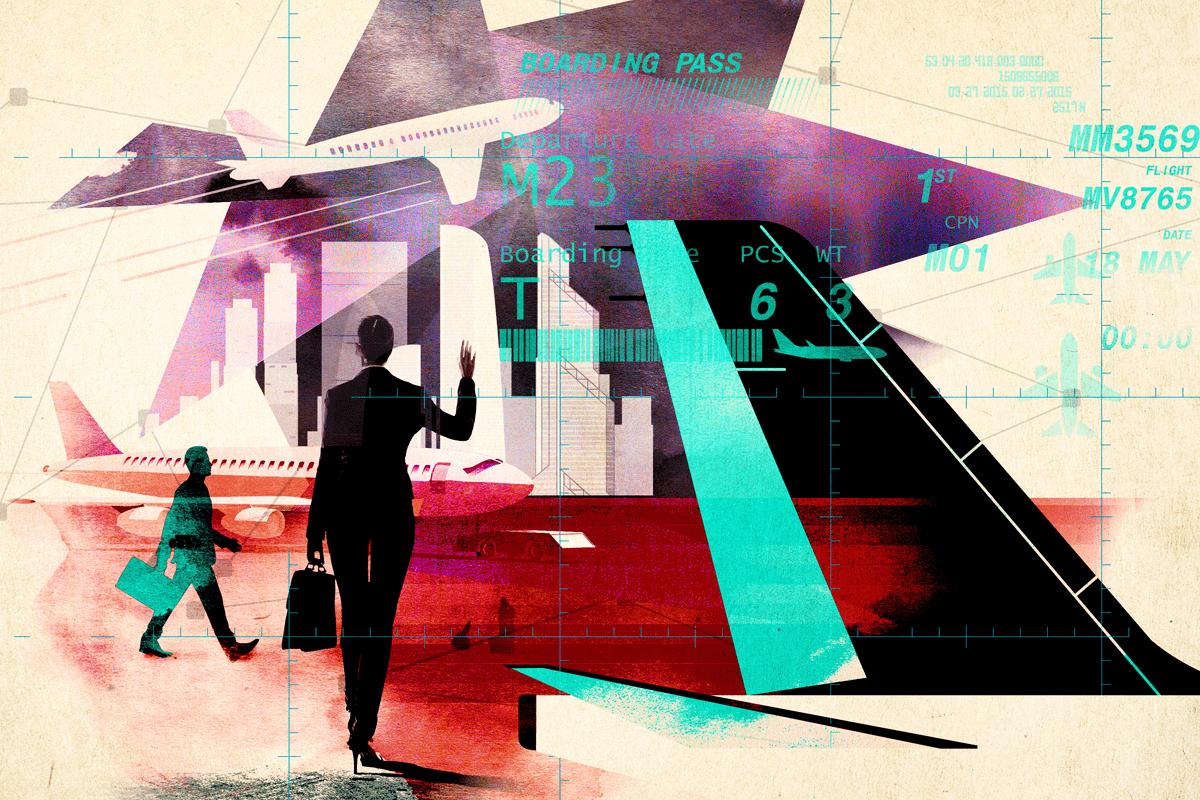 When D.E. Shaw & Co. LP revealed a 64-page presentation earlier this month urging Emerson Electric Co. (EMR) to break up and cut expenses, a key part of the $50 billion fund’s insurgency at the underperforming industrial giant focused on costs associated with its fleet of eight private jets and a helicopter.

“It shouldn’t take a team of high-priced consultants to understand that operating a fleet of eight private jets isn’t efficient or optimal,” D.E. Shaw wrote in a letter to Emerson’s board Oct. 15. “We believe the Emerson aviation department should be pared back immediately and personal use of remaining corporate aircraft should be substantially limited…”

The fund’s concerns focused both on business and personal use of jets. The report cited proxy material noting that Emerson CEO David Farr’s use of the company’s private jets for personal use cost $359,483 for fiscal 2018. Emerson contends the planes are necessary for security purposes and enable management to “frequently visit employees, customers, local governments” and others for work purposes. Farr pays back the company for use of personal air travel at “first-class rates.”

Experts following the situation argue the flights on private jets are significantly more expensive than first-class tickets and can in some cases run $4,000 to $8,000 an hour. Even so, analysts point out in reports that Emerson’s private jet fleet is not a material contributor to the bottom line. “The corporate jets analysis is easy, but not a material cost needle mover,” Stephens analysts said in a report following the D.E. Shaw presentation.

Costs associated with private use of corporate jets may not be material for SEC purposes — but they clearly matter to activist hedge funds targeting businesses. Beyond D.E. Shaw, activist investors, including Engaged Capital LLC, Voce Capital Management LLC and Blackwells Capital LLC among others, in recent months have cast a spotlight on corporate jet use as part of their campaigns targeting cost overruns and subpar shareholder returns. Expenses associated with corporate aircraft are often not central to their insurgencies, but their criticism of personal use of jets has resonated with investors.

“It is poor form and bad optics for the C-suite to continue to take advantage of a private jet for personal reasons when you are overseeing a company that is struggling operationally,” said Andrew Freedman, partner at Olshan Frome Wolosky LLP in New York. “Everyone should be doing their part to keep costs down. It is low-hanging fruit for an activist.”

Freedman, who represents activists, and others argue that investors will target personal use of corporate jets as an unjustifiable perk at underperforming companies because their use represents a stark contrast to harsh realities facing shareholders.

“They are easy picking for those decrying corporate greed and excess, especially when the jet is used for personal reasons,” Freedman said. “You can maybe rationalize use of a corporate jet by senior executives flying private for efficiency and privacy reasons, but when it is combined with excessive personal use, it becomes a big problem.”

He argued that issues associated with personal use of corporate jets will resonate with investors even if the costs associated with them may not be material in the bigger picture of a corporation’s total expenses.

Others, including governance experts, raise similar issues. “It is a symbol of a guy or girl who needs to be treated as royalty; as they sip their latte made by flight attendants on their way to oversee their serfs in factories in various often not-so-hard-to-reach places,” one governance expert told The Deal.

Boardroom shakeups often occur when activists point to private jet use, among other concerns, at troubled companies. Engaged Capital’s Glenn Welling in 2017 lashed out over Rent-A-Center Inc. (RCII) then-chairman Stephen Pepper’s use of the rent-to-own firm’s private jet to fly from his residence in Mexico City to an airport in Orange County, Calif. Pepper ultimately resigned under pressure from Welling, who also succeeded at installing three directors, one of whom later became chairman. Rent-A-Center later sold its jet for between $7 million and $8 million, according to a person familiar with the situation.

There are many other high-profile examples of activists pointing to personal use of company aircraft. In February, activist J. Daniel Plants issued a letter excoriating Argo Group International Holdings Ltd. (ARGO) CEO Mark Watson with overspending on three jets, including a G-5 Gulfstream aircraft. “A ‘G-5,’ as this particular Gulfstream model is known to the cognoscenti, is one of the most luxurious and prestigious status symbols among the global jet set,” Plants said in a letter. “We believe the G-5 is Mr. Watson’s personal chariot, whisking him and his entourage around the world in pursuit of his kaleidoscope of hobbies and interests, which sometimes includes Argo business, but often doesn’t.”

The campaign raised the question of whether an insurer the size of Argo, which has a $2.4 billion market capitalization, should have a corporate jet at all. Voce provided details of personal use of the jet for an extensive 2017 Christmas holiday to India and Amsterdam and 37 flights in three years from a home in San Antonio to Bermuda, where the business is based, among other personal flights.

Earlier this month, Argo confirmed that it had received a subpoena from the Securities and Exchange Commission regarding the disclosure of “certain compensation-related perquisites.” It’s possible that a significant portion of disclosure issues the SEC is reviewing are related to C-suite perquisites involving personal use of corporate jets. Plants failed in an effort earlier this year to install directors after a pair of state regulators intervened at the last minute. However, the commission’s subpoena appears to have breathed new life into his campaign.

Separately, in 2018, Blackwells’ Jason Aintabi escalated a change-of-control director fight he had underway at grocer and distributor SuperValu Inc., with a letter arguing that the company’s private jet was being used by nonemployees — family members of executives and directors — for nonbusiness purposes. In July 2018, SuperValu agreed to sell itself to United Natural Foods Inc. (UNFI) in a deal that was struck less than a month ahead of Aintabi’s contest at the grocer.

Beyond CEOs, directors are frequent beneficiaries of private jet use. The Deal has learned from sources that historically Wynn Resorts Ltd. (WYNN) would fly its board to Las Vegas via private jets for meetings. On their arrival, directors were chauffeured via Rolls Royce limousines to the hotel for meetings and put up in expensive suites, they added. However, by early 2018, founder Steve Wynn, a frequent user of the jets, resigned from his CEO position in the wake of sexual harassment allegations and Matthew Maddox replaced him in the role. The same year, Wynn’s ex-wife, Elaine Wynn, launched a successful governance fight that ultimately shook up the chain’s board and one that brought on her candidate, Phil Satre, an ex-Fortune 500 CEO, as chairman.

A Wynn spokesman said major governance changes related to aircraft use were instituted after Maddox became CEO. He added that board members fly commercial airlines to director meetings in Las Vegas and are transported to the hotel, where they stay in standard suites, via Escalade automobiles. “Our best suites are reserved for casino guests,” he said.

Probably the highest-profile example of corporate excesses related to corporate jets involved former General Electric Co. (GE) CEO Jeff Immelt’s practice of flying a backup private plane. Immelt stepped down in 2017 — he was already in the hot seat with Trian Fund Management LP’s Nelson Peltz at the time. His successor, John Flannery, reportedly grounded the company’s fleet of corporate aircraft as part of a cost-cutting move.

Disclosure of details about jets and policies around personal use factor in the equation as well. It is unclear how D.E. Shaw uncovered the details about the number and types of private jets employed by Emerson, or how other activists have identified specific information about the corporate airplanes they target.

Companies often seek to hide information about their jets, partly by retaining little-known corporate subsidiaries to purchase them. Insurgent funds may be able to cross-reference Federal Aviation Administration websites with corporate subsidiary names to determine the ownership. A person familiar with the situation said it is likely that a significant portion of disclosure issues the SEC is reviewing at Argo are related to C-suite perks involving personal use of the corporate jets.

Olshan’s Freedman contended companies should set up a policy for what constitutes personal use of a corporate jet while they mandate a plan to scale back use of the jets if performance suffers. Executive compensation plans should also consider use of corporate jets, so companies can adjust when the business slows.

Freedman said he believes companies should voluntarily provide additional information about corporate jet programs, such as the number and types of jets they own. Additional disclosure of private jet programs would force companies to be more thoughtful about their use, especially as investors become more interested in environmental, social and governance (ESG) costs.

“If companies know that they will be voluntarily making additional disclosures, they will start thinking more seriously about how much corporate and personal use they will allow for,” Freedman said. “There are environmental costs associated with jet use as well that will resonate with ESG-focused investors.”

Critics contend that at the very least D.E. Shaw’s Emerson campaign demonstrates that more transparency is needed to determine what constitutes personal use of aircraft and how jet costs are determined, considering expenses associated with staffing, maintenance, hanger storage, depreciation and return flights.

“Companies have every incentive to use a method to value the private use of the corporate jet as low as possible. It is unclear how Emerson arrived at this number,” the governance expert said.

As the economy cools and discussions about the end of the economic cycle accelerate, corporate boards and executives may want to reconsider how much they allocate to their C-suite private jet programs. If they don’t an activist could target them next.

Editor’s note: The original version of this article was earlier published on The Deal’s premium subscription website.